The audience could witness an exciting, but shorter-than-planned race on the 16th of November, 15:30 PM local time. Two riders crashed out right in the first lap, at the Lisboa corner. In the first laps, Sandor's teammate, Gary Johnson and the title defender Michael Rutter battled for the first position. Behind them, on the third place came Ian Hutchinson, who kept closing the gap. In the third lap, he overtook Johnson, and he did the same with Rutter, on lap 6th. The order in the lead did not alter until the flag - which was not chequered, but red this time. In the twelfth lap, Dean Harrison crashed out. He left unhurt, but the bike was lying on the track in such a dangerous place, that it was very risky to bring out, therefore the race direction decided to suspend the race. As there were only two laps remaining, the race was not restarted. Hutchy scored his first victory, Rutter finished second and Gary Johnson third. Sandor finished on the fantastic 19th place.

"Red flag! I finished 19th after a terrible start. It is over now. I am alright. My lap time was not good, as I rode with 23 litres of fuel, and I used wron setup for my front suspension. I wasn't hard enough after my bad start. There was a big mix-up on the first braking. My goal was top 20, and now I am 29th, but I kicked the shifter apart, and my leg hurts! I am very happy, I don't know what to say...  Now the adrenalin is high in me. I am full of sweat. It was a hard race. I defeated Ben Wylie who finished third at Terlicko in the Grand Finale. It is impossible! Quattro Plant finished as the most successful team! I based my future with this. The four-leaf clover I got from Gabi, protected me all the time, superb feeling."

"My dream came true. Top 20 was my goal, and I finished 19th even with a broken leg, therefore I got an invitation immediately from the organizers for next year. I was very stressed on the warm up. The race saw big battles. During the three days I kicked the shifter apart with my wrong leg. So I could shift back only that I set the clutch backlash-free. My start was bad, I had to close up and fight. It was hard to get past the slower riders. But nevermind, we are the best team, and reached my goals and my future is secured. It is a big achievement that I defeated ICE Valley BMW rider Ben Wylie, who finished third on the Terlicko Grand Finale, where I finished only 20th, and where he was nine seconds faster than me. I developed this much since September the 2nd. It is hard to handle all these good things, but I deserved these.

Thanks for all the support. I would like to thank this year to everyone, who are visible on my clothes. Especially for the Red Line, and big thanks for the others: H-Moto and Krisztián Kelemen, Polidom, Danger Bikes, Superzone. I must not forget the dedicated work of my friend Dr. Ervin Popik in order my broken leg to heal as fast as possible. Greetings to everyone, Sandor" 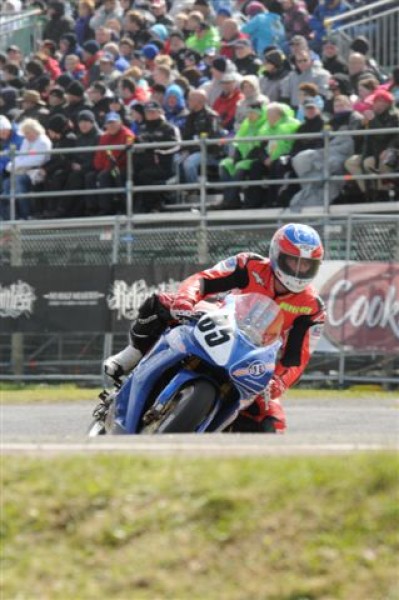